*Shared in support of Leicestershire Police

Leicestershire Police has launched the latest phase of its Lives Not Knives campaign with some hard hitting imagery.

The imagery, which will appear on buses throughout the city and county, includes a teenager in a mortuary with the words “Killed by his own knife.” 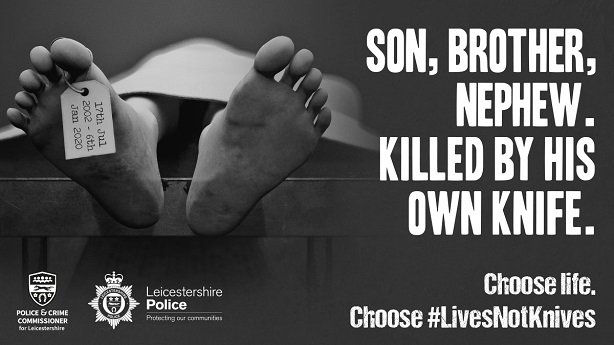 Another image depicts a gravestone with the same wording. 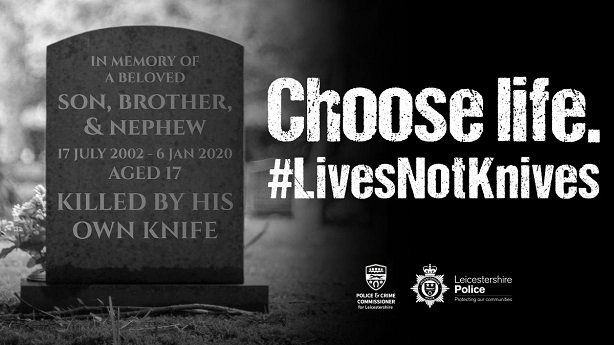 It’s hoped that by highlighting the consequences, the campaign will prevent people from picking up a knife in the first place.

Statistically, those who choose to carry a knife as a weapon or as a protective measure, are more likely to be injured or killed by it.

The campaign has teenagers specifically in mind and aims to educate them of the dangers of carrying a knife as early as possible.

Superintendent Shane O’Neill, who leads the force’s response to knife crime, said: “We hope these new images will raise awareness of knife crime among youngsters and its potentially deadly consequences while encouraging them to seek alternative and positive routes by channelling their energies elsewhere.

“Education is the best way of preventing potential offenders later on in life. This latest phase of our Lives Not Knives campaign is a big part of that and although the majority of people don’t carry a knife, it’s that small minority we hope to get the message through to.

“It sounds obvious but many teenagers don’t realise that carrying a weapon, whether for reassurance and protective purposes, puts them at far higher risk of injury and death. They may never intend to use it, but situations can quickly get out of hand and a split second decision in the heat of the moment, can ruin lives and leave families devastated.

“We hope this campaign will promote a discussion among those who carry knives and their peers and families. This should make them think twice so that they can make the right choice and not pick up a knife in the first place.”

The force, which will also publish the images on social media channels throughout the coming months, as well as bus shelters throughout the city, spoke to young people in schools to help shape the campaign.

Supt O’Neill added: “Our research with them showed that the most memorable images and therefore more likely to be listened to, were those that were hard hitting and highlighted the consequences.

“As ever we also encourage anyone with concerns for themselves, a friend, family member or relative to speak to us or another appropriate agency for support and diversion.

“Clearly we will not tolerate knives on our streets and will do everything we can to catch offenders.”

Lord Willy Bach, Police and Crime Commissioner for Leicestershire, has funded many projects to combat the scourge of knife crime, plus the trauma kits now carried in frontline police cars and is supportive of the campaign.

He said: “It’s important that we communicate effectively with those at risk of either becoming a victim or perpetrator of knife crime.  That means using a variety of methods and imagery.  I very much hope that this hard-hitting campaign drives the message home that carrying a knife can also carry dire consequences - it’s just not worth it.”