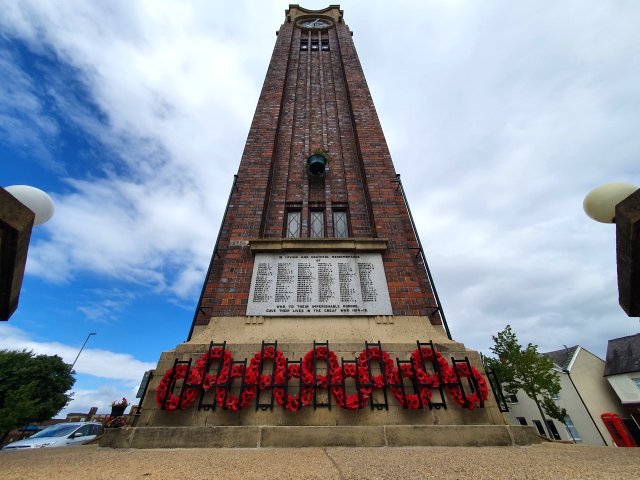 Memorial wreaths will return to Coalville’s Memorial Clock Tower as restoration work on the town landmark was completed this week.

The new wreath holders are fixed to the base of the tower and will allow up to 56 wreaths to be displayed at times of national remembrance on the 21-metre tall war memorial.

The Planning and Development Team at North West Leicestershire District Council (NWLDC) designed the wreath holders and worked with contractors to install the new additions, which create the finishing touches to restoration work of the Grade II listed clock tower which began back in 2018.

Restoration work to the Grade II listed clock tower started in June 2018 after a structural survey showed it was at risk.

The restoration works were carried out thanks to a £54,000 National Lottery grant, awarded by the Heritage Lottery Heritage Fund (NLHF). The project is also expected to receive a £26,000 grant from the Grants for War Memorials Scheme. This funding is administered by the War Memorials Trust (WMT) under the First World War Memorials Programme and is supported by Historic England.

The remaining funding was provided by NWLDC.

During the restoration project, the story of the clock tower was taken out into the community through a local history project with Belvoirdale Primary School. Heritage First also delivered an oral history project to capture memories of memorial square and a touring exhibition and brochure exploring how the area commemorated the fallen.

“This Clock Tower acts as a beacon of hope and sacrifice to the whole community. The installation of the new wreath holders enhances what is already an exceptional place of remembrance to those whose names are engraved on it.

“The new wreath holders are excellent in design and very in keeping with the solemnity of the Memorial. The branch express their appreciation to North West Leicestershire District Council and thank them for a job well done.”

Councillor Tony Gillard, Business and Regeneration Portfolio Holder at NWLDC said “Having stood proud over Coalville for almost 100 years, the clock tower is a huge part of our heritage and an important reminder of those who gave their lives to fight for our tomorrow.

“The railings will allow wreaths of remembrance to be displayed securely when commemorating the fallen and are a wonderful addition and finishing touch to our much-loved memorial tower after its restoration.”