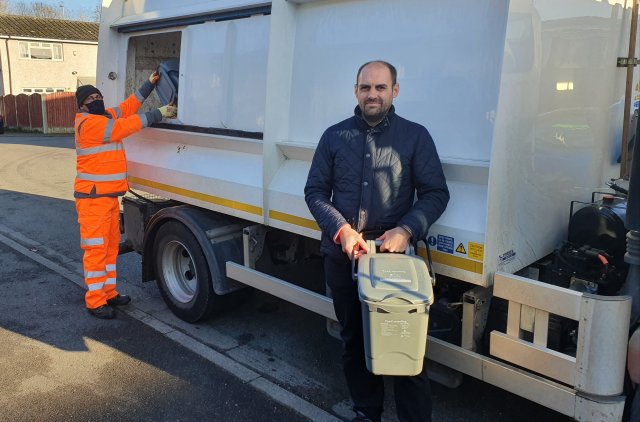 More than three tonnes of food waste has been collected in the first week of a food waste collection trial in Coalville, which launched on Tuesday 17 November.

During the trial run by North West Leicestershire District Council (NWLDC), food waste is collected weekly for 2,000 households across Coalville, Ravenstone and Whitwick.

Almost 40 per cent of households engaged with the trial during the first week of collections.

An existing trial with 2,000 households in Measham and its surrounding villages resumed in early November after being paused in March 2020 due to the coronavirus pandemic. Participation in this trial is steadily rising to its pre Covid-19 levels of a 35-44 per cent participation rate.

During the trials, all food waste – including plate scrapings, bones, meat and tea bags is collected weekly from homes, in addition to the usual fortnightly recycling collections.

Around one third of all waste in black bins in the district is food – most if which is currently sent to landfill. Food waste sent to landfill releases methane as it breaks down – a greenhouse gas that is 25 times more potent than carbon dioxide.

Food waste collected on the trial is instead sent to a Biogen facility in Atherstone, Warwickshire. Here it is recycled through an anaerobic digestion process where it creates biogas which can be used to generate electricity and heat, and a bio fertiliser for use on local farmland.

Sarah Green, a resident in Coalville, is currently trialling the food waste collections. She said: “I think the food waste trial is a great idea. We recycled a lot in the first week that we would normally throw away into our black bin such as tea bags, leftover plate scrapings and fruit and veg peelings.

“The indoor kitchen caddy and outdoor bin are both easy to clean once emptied and surprisingly do not smell. The compostable bags are provided so it would be silly not to make use of this new service. I hope it is a success and will continue after the trial.”

Councillor Andrew Woodman, Portfolio Holder for Community Services at NWLDC, said: “It’s brilliant to see people embracing the trial which has resulted in large volumes of food waste being collected.

“Whilst we should all try to waste as little food as possible, it’s also important we look to dispose of any food waste we do create in more environmentally friendly ways.

“Not only will food waste on the trial be diverted from landfill but it will be recycled into two very useful products – energy to power homes and businesses, and a bio-fertiliser used on farmland to help grow food.”

Steve Freeman is a food waste collection crew member at NWLDC, he said: “It’s fantastic to see so many residents putting their food waste containers out on the kerbside. The feedback we’ve received from residents whilst out on the round has been very positive. They think it’s a great idea and they’re very pleased they can now recycle food waste.”