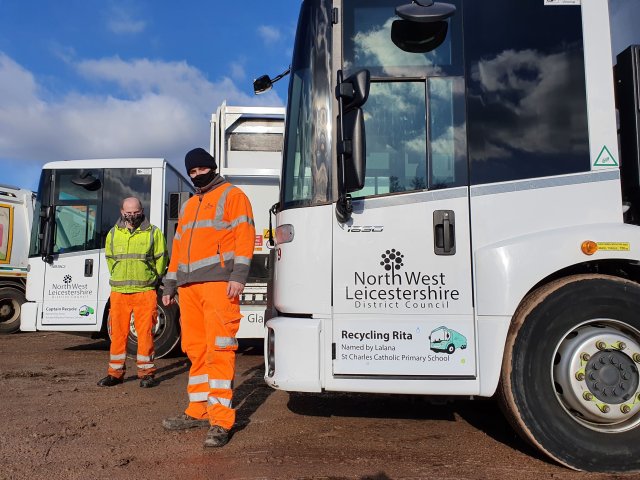 Six of North West Leicestershire District Council (NWLDC)’s recycling lorries have been named as part of a competition run with local primary schools.

Pupils were encouraged to colour in a graphic of a recycling lorry and give it a name. More than three hundred entries were received from pupils across the district.

The entries with the most votes have been selected as the winning names:

The recycling lorries now display the winning names on the cab door and rear of the vehicles. Keep an eye out to see them collecting separated glass, plastic/cans/tins, paper, textiles, batteries and mobile phones from households across the district.

The council were also particularly impressed by a second entry from Alfie Stewart named ‘Clean Elizabeth II’. The council thought the name perfectly suited one of the street cleansing vehicles which now displays the name.

Councillor Andrew Woodman, Portfolio Holder for Community Services at NWLDC, said: “It’s been brilliant fun engaging with local schools for this competition. We received some very inventive entries; it was difficult to pick just six names!

“We want to say a huge thank you to all the schools who took part. Engaging with the younger generations in our communities about reducing our impact on the environment is incredibly important. They are our future and can help to play a vital role in making our district greener.”

The competition was part of NWLDC’s work with schools and communities as part of their ‘Recycle more…’ plan. The plan aims to increase the district’s recycling rate to 50% by 2023. More information can be found online at www.nwleics.gov.uk/recyclemore