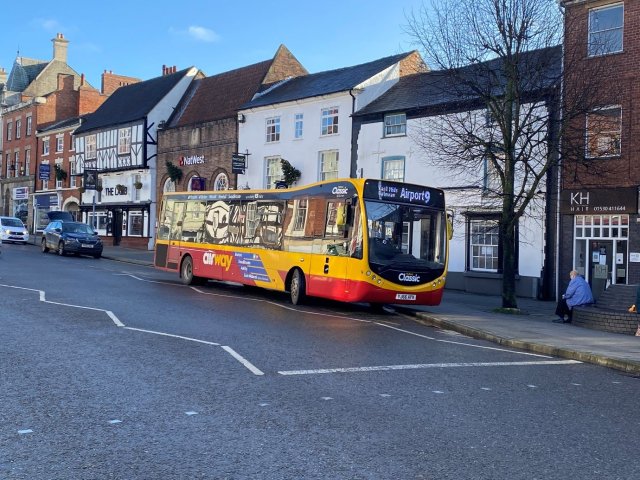 The district council has co-funded the airway 9 service with operator Midland Classic and other members of the East Midlands Enterprise Gateway (EMEG) Access to Work Partnership, to open up job prospects for people living in Ashby-de-la-Zouch and Swadlincote and reduce the amount of cars on the road.

The bus route, originally connecting people to Burton and Ashby-de-la-Zouch, was extended in October 2019 to provide a direct link from Burton, through Swadlincote, Ashby-de-la-Zouch, Melbourne, the transport hub at East Midlands Airport (EMA) and on to the SEGRO Strategic Rail Freight Interchange. Further connections at the airport also allows travellers to get to and from Derby, Loughborough, and Nottingham.

To help support the night-time economy in North West Leicestershire, the airway 9 service operates seven days a week and provides additional early morning and late evening off-peak services for employers at the EMEG whose staff work beyond nine to five shift patterns.

Encouraging people to use public transport rather that their own vehicles also supports NWLDC’s Zero Carbon commitment, which aims to ensure the district is carbon neutral by 2050.

Working jointly as a member of the EMEG Access to Work Partnership, the district council began to research and design the new public transport service in June 2018 and will be contributing approximately £100,000 over a three-year period.

Despite the restrictions put in place during the coronavirus pandemic, Midland Classic has maintained the airway 9 service to ensure that employees can still get to and from work.

Councillor Tony Gillard, Portfolio Holder for Business and Regeneration at NWLDC, said: “The airway 9 bus service has been designed to create more job opportunities for people in North West Leicestershire by making it easier to get to and from the East Midlands Enterprise Gateway.

“By operating seven days a week with services starting early in the morning and running into the late evening, the bus route takes all types of work into consideration including those in the district that work unsociable hours.

“We also believe that by investing into the airway 9, it will help to encourage people to leave their cars at home and use the service as part of a daily commute to help reduce carbon emissions and create a more sustainable environment.”

Councillor Simon Spencer, Derbyshire County Council’s Cabinet for Highways, Transport and Infrastructure, said: “We’re pleased to be able to support this joint initiative with NWLDC and other partners to open up the wide range of job opportunities available at East Midlands Airport and the East Midlands Enterprise Gateway to those residents of South Derbyshire who might otherwise have struggled to reach them.”

“The service 9 improvements are part of a long term project which has seen improvements to bus services to East Midlands Airport and East Midlands Enterprise Gateway from Ilkeston, Long Eaton and Derby which has allowed significant numbers of people to take on new jobs.”

James Boddice, Managing Director at Midland Classic, said: “Midland Classic is proud to work closely with members of the EMEG Access to Work Partnership, to deliver the improved airway 9 a quality local bus service designed to create more job opportunities for people in East Staffordshire, North West Leicestershire and South Derbyshire by making it easier to get to and from the East Midlands Enterprise Gateway, East Midlands Airport along with many other adjacent businesses.

“Despite the restrictions put in place during these challenging times, Midland Classic has maintained the airway 9 service to ensure that employees can still get to and from work.

“Airway 9 runs seven days a week from early in the morning and running into the late evening, making airway 9 a viable alternative to using the car – helping to free up our busy roads along with reducing carbon emissions for the wellbeing of everyone.”

For more information on the services available, visit www.midlandclassic.com/routes-and-services