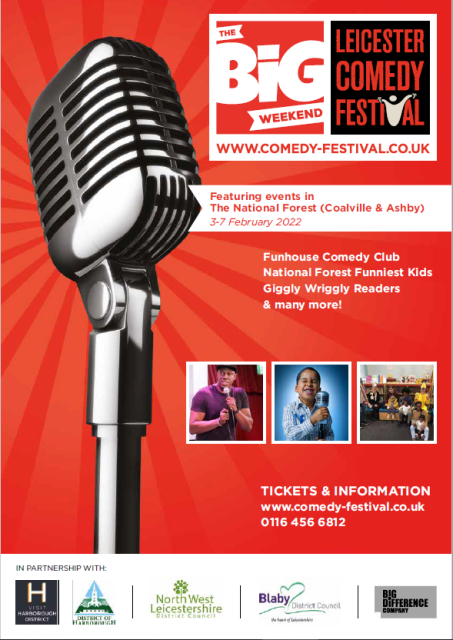 A taste of Britain’s favourite comedy acts will be returning to the National Forest next month.

The Big Weekend will be coming to North West Leicestershire from Thursday 3 February to Monday 7 February as part of the hugely successful Leicester Comedy Festival.

North West Leicestershire District Council (NWLDC) has worked with the festival organiser to bring events into the National Forest area during the first weekend of the festival, resulting in a feast of comedy entertainment for all ages.

There’s lots more happening for children too with the National Forest’s Funniest Kids at The Century Theatre and Giggly Wriggler Readers at Coalville and Ashby Library.

For more information about all the events and shows, and to book tickets, visit www.nwleics.gov.uk/bigweekend

Councillor Tony Gillard, Portfolio Holder for Business at NWLDC, said: “We’re hugely excited for The Big Weekend to return to the National Forest.

“It’s great to be working with the Leicester Comedy Festival which has already established itself as a favourite in the city, and their experience and expertise is very welcome to bring a taste of the festival to the people of North West Leicestershire.

“Tickets are available so head online and view the full programme!”