Councillor Russell Boam was presented with the ceremonial chains of office of Chairman of North West Leicestershire this week.

At a meeting of North West Leicestershire District Council’s (NWLDC) Full Council on Tuesday 10 May 2022, outgoing Chairman Councillor Virge Richici announced that the first citizen of the district would be Councillor Boam. Councillor John Bridges was appointed Deputy Chairman. 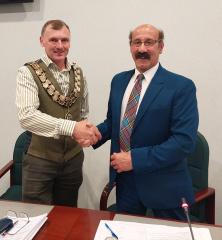 Councillor Richichi, ward member for Sence Valley, was appointed to the role in June 2020 and during the last 12 months alone raised just over £8,000 for the Mountain Rescue and RNLI. In his last six months he also raised £4,006 as part of a Ukraine charity fund.

“Over the past three years a lot of us and the country has gone through a lot of pain and sorrow and I hope we can look forward with optimism and look back with gratitude,” Councillor Richichi said.

Councillor Boam, who has represented the Valley ward since 2015, announced that as well as chairing Full Council meetings and representing the authority at a host of events across Leicestershire, his charity of the year is Hospice Hope.

He said: “It’s a big honour to become Chairman for the year, I am really looking forward to it.

“Serving as Deputy Chair for the past year meant I was able to learn more about what’s going on in the area and I look forward to attending more to represent North West Leicestershire.”

The meeting also saw Councillor Richard Blunt elected leader for the 16th year, and three councillors receive long-service awards for representing communities on the council for 21 years. They were: