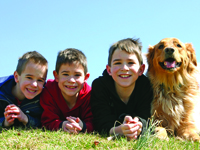 Provided you do this and dispose of the scoop in a proper manner you will have no problems.

It is an offence if you don't remove the faeces of any dog in your charge immediately from any land open to the air which the public are entitled or permitted to have access to within the North West Leicestershire District Council (NWLDC) area.

2: Dogs on lead by order

Anyone who is in charge of a dog will be guilty of an offence if they allow the dog to enter or remain in a fence / enclosed children's play area or designated marked sport pitch or athletic area.

Anyone who is in charge of a dog will be guilty of an offence if they fail to produce an appropriate means to pick up the dog faeces following a request from an authorised NWLDC officer.

Anyone in breach of the above orders may be issued with a Fixed Penalty Notice of £100.

A discounted rate of £60 will apply if the payment is received by the council within 10 days of issue of the notice. Anyone failing to pay a fixed penalty notice after 14 days may be taken to court and if found guilty of an offence under article 3 shall be liable on the summary conviction to a fine not exceeding level 3 on the standard scale. This is currently £1,000.

THIS LAW DOES NOT APPLY TO PEOPLE WHO ARE REGISTERED BLIND AND ASSISTANCE DOGS RELATED TO A REGISTERED CHARITY.

The penalty on conviction for an offence is a fine not exceeding level 3 on the standard scale (maximum £1,000).

However an authorised officer who has reason to believe that a person has committed an offence may give that person a notice offering the opportunity of discharging any liability to conviction for the offence by payment of a fixed penalty.

We prosecute anyone who fails to pay the fixed penalty.