Home » For residents » Planning and building control » Planning and development » Conserving the historic and natural environments » Memorial Clock Tower Project » These names are lamps of sacrifice » Lamps of Sacrifice: Coalville 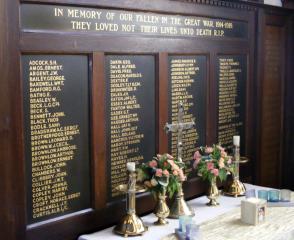 An ornate wooden screen was installed to the transept and the chancel, with decorative motifs that include poppies. On the altar there is a jewelled brass cross, donated by the widow and children of the Rev Samuel Hosking, and a brass book rest given in memory of William Thomas, who was killed in action on 9 April 1917.

The churchyard contains a private grave with an inscription for Corporal John Sheffield, who died on 13 March 1915. A pavilion was erected on the school playing field to commemorate 'old boys' who fell in the First World War. The brick pavilion was designed by McCarthy Collings & Co and opened on 11 November 1924.

The school's 'remembrance stone' was originally located at Bridge Road School (later Coalville Technical College). It was unveiled on 24 May 1922. It is "a large rough piece of Leicestershire granite" inscribed with gold lettering. It commemorates two teachers and five 'old boys' who fell in the First World War. The former Primitive Methodist Chapel contains two First World War memorials - a stone tablet that is set in a plaster frame (dedicated to the chapel scholars) and a marble memorial tablet. Sidney F Dodd's name appears on both.

Before the war, Sidney worked in the pattern office at Wootton Brothers, the Coalville iron founders. He volunteered in 1914 and was confirmed killed on the 21 October 1916, aged 21. 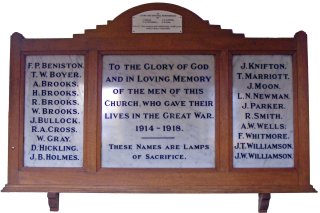 The chapel's memorial comprises three marble plaques set inside an oak frame, with the names of the fallen inscribed upon them. A further small plaque has been added to the head of the frame to commemorate those who lost their lives in the Second World War.

Inscribed on the right hand tablet is the name of Fred Whitmore. Fred was from Hugglescote and the secretary of the village's football team. He joined a Black Watch battalion in 1914. Being an excellent shot he was put on sniper duty and gained the rank of Lance Corporal. After being injured in battle he was taken prisoner and died shortly afterward, on 28 May 1915. 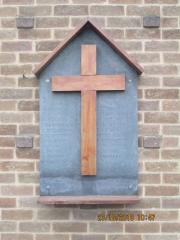 Attached to the front of the building, there is a simple slate tablet that contains the names of 25 fallen soldiers. The tablet was probably taken from the RC Church of St Saviour (demolished), which was erected on Highfield Street in 1900.