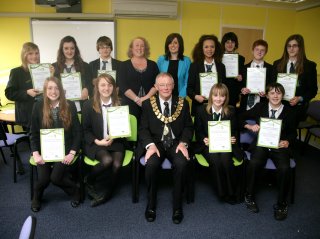 Students from Castle Rock High School have been awarded "Environmental Champions of the Year 2012" by Keep Britain Tidy.

Following a project on solving dog fouling problems, which earned them Green Footprints Champions status, the students at Castle Rock went on to attend "Bark in the Park" & impressed the Keep Britain Tidy judges with their commitment to environmental challenges.

The events are open to all members of the public. All children need to be accommpied with an adult or complete a permission form for the community litter picks. These can be posted to for the attention of the Street Managers at the Council Offices before the event brought along on the day. The photo shows a litter pick help with support from Stephenson College and MacDonalds staff in April 2010.

All Street Managers are CRB checked and have experience in working with people.

Events in the Coalville area

Throughout August you may also see us out and about in the district, promoting the anti-litter message and assisting you in maintaining a cleaner environment.

And it's not just anti-litter messages we promote we are also involved in combating other environmental issues including dog fouling, fly posting, fly-tipping and parking issues.

Did you see us?

On the 23rd of August 2010 the Street Scene team filmed a video to highlight the issue of littering within the District. We would like to thank all those who came to support us in the filming of this production. The planned first showing will be at Stephenson College early in September 2010. Below are some photographs from the filming of the video. 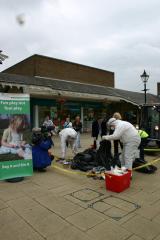