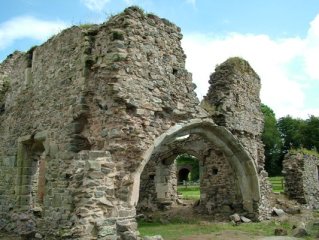 Grace Dieu Priory was founded as a small Augustinian nunnery in the 13th century and remained in existence until 1538 when it was closed during the Dissolution of the Monasteries and then converted into a Tudor house. From the end of the 16th century the buildings went into decline although some activity remained on the site, mainly agricultural.

The ruins stand in a valley bottom bounded by a small brook on the edge of Charnwood Forest and are situated on the A512 road from Loughborough to Ashby de la Zouch, Leicestershire

The conservation of the ruins has been overseen by the Grace Dieu Priory Trust, a charitable trust company at a cost over half a million pounds which has been obtained from many sources.