On the 9 November 2018 Roger Bisgrove of the Swannington Heritage Trust delivered a lecture at Coalville's Century Theatre. The lecture was delivered as part of the Memorial Clock Tower project, which was funded in part by the National Lottery Heritage Fund. The following article is based on Roger's lecture.

Names
In the second half of 1924 the committee turned its attention to the list of names that would be inscribed on the memorial. In July 1924 “they had a list which Mr Baldwin prepared (with the assistance of the Coalville Times) at the end of the war”. On the 15 August 1924 the following notice appeared on the front of the Coalville Times:

“The committee [is] particularly anxious that no name shall be omitted from the proposed memorial. All those who resided in the area at the time of enlistment and who fell in the Great War are entitled to have their name inscribed. The following is a full list of names now in the committee’s possession … Should any name not in the above list be known to you, kindly give the name with full particulars as early as possible to the honorary secretary, Mr TI McCarthy, Central Chambers, Coalville”.

The committee met on the 8 December 1924 and appointed a subcommittee “for the purpose of verifying the further claims of names received for inscription on the memorial”.

Construction
On 8 December 1924 the committee “considered the question of the name of the site for the memorial”. This question was considered pertinent because “the erection of the memorial has actually commenced”. The secretary reported that he had “notified the council and suggested the name to be Memorial Square”. At the following council meeting Mr Tapp proposed “that the name should be Memorial Square” and Mr Austin seconded. The resolution was carried.

On 19 December 1924 the Coalville Times reported that “the erection of the Coalville War Memorial is now proceeding” and that “Messrs W Moss & Son are carrying out the work from the designs of Messrs McCarthy Collings & Co”. The newspaper reported that “steel casements are provided on all sides for the purpose of lighting the chamber” and that “the upper casements lend themselves admirably for the purpose of decorating the tower with flags on special occasions”.

The committee met again on the 27 February 1925. Mr McCarthy “reported that the Leicestershire & Warwickshire Power Supply Co would be glad to give eight torches of solid bronze to the architect’s design, the cost not to exceed £75. A resolution was unanimously passed thanking the company for their most generous gift”. 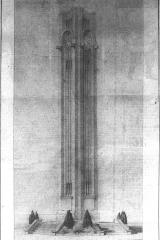 Fundraising
On 27 March 1925 the Coalville Times reported that “there has been a house-to-house distribution of a circular appealing for further funds towards the cost of the war memorial. The circular, signed by Mr Farmer and Mr McCarthy, states: ‘In order to complete the memorial free of debt at its unveiling, it is necessary to raise not less than £300’”.

The committee met again on the 5 October 1925. The committee noted donations including donations from Messrs Stableford & Co (£25) and the South Leicestershire Colliery Co (£25) but there was “a balance of £97 to be raised”. Unveiling and other ceremonies
The Memorial Clock Tower was unveiled on the 31 October 1925 by Mary Booth, the widow of Charles Booth of Grace Dieu Manor. The programme for the unveiling ceremony offered a “description and particulars of the memorial”:

“The memorial consists of a clock tower, 13’6” square at the base, rising to a total height of 68’ above the pavement level. The base has approach steps on the north, south, east and west sides, supported by wing walls in local rubble granite, leading to a landing surrounding the base of the tower.
“The lower part of the tower is specially designed to accommodate the name tablets, which are executed in Cornish granite and upon which are inscribed the names of the fallen in lead letters.
“The main shaft of the memorial is faced in Staffordshire multi-coloured brick in cement. The lines of the name tablets are carried up the main shaft to form continuous panels terminating at the clock dials, around which are carved laurel wreaths of stone. The summit of the tower is faced with stone, having panelled concave sides, with a bold stone coping as a finish.
“The tower is equipped with an electric clock, having a 5’ dial on each side, and fitted with striking gear for striking the hours upon a bell, which is fixed on the outside of the flat roof of the tower.
“The memorial ... occupies the centre of a kerbed island for diverting the traffic, which is paved with Yorkshire crazy stone paving.” 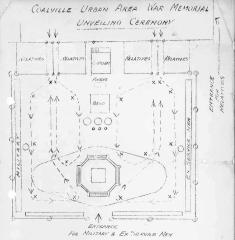 In 1925 Armistice Day fell on a Wednesday. The Coalville Times reported that “there were no official arrangements to celebrate [sic]”. However, “a touching scene was witnessed in Memorial Square. When the buzzer at Messrs Stableford’s works gave one long blast at the eleventh hour, a crowd around the memorial stood reverently for two minutes”. The “annual commemoration service” was held on Sunday 15 November. The Coalville Times reported “a huge gathering round the Clock Tower in Memorial Square”.

Postscript: The Second World War memorial
Germany surrendered unconditionally to the Allies on the 8 May 1945. Japan announced its surrender to the Allies on 15 August 1945 and signed an Instrument of Surrender on 2 September.

The Memorial Clock Tower was altered for the town’s War Memorial Committee. The central element of each “wing wall” was raised to accommodate an additional name plaque. The architects for the alterations were again McCarthy Collings & Co.