On the 9 November 2018 Roger Bisgrove of the Swannington Heritage Trust delivered a lecture at Coalville's Century Theatre. The lecture was delivered as part of the Memorial Clock Tower project, which was funded in part by the National Lottery Heritage Fund. The following article is based on Roger's lecture.

The memorial was unveiled 6½ years after the Treaty of Versailles and 5½ years after the first meeting of the Coalville War Memorial Committee. The Coalville Times noted that “in its early stages the scheme came in for severe criticism, some of the residents being of the opinion that the memorial might have been in a different form and on a more suitable site”, but such criticism had “gradually disappeared”.

The ‘scrap heap’
The Memorial Clock Tower was “associated with a great improvement right in the centre of the district”. Until 1924 the site had been nicknamed the ‘scrap heap’; it had contained “unsightly hoardings, wooden shanties and a barn-like apology for a market shelter”.

Historic maps and photographs indicate the appearance of the ‘scrap heap’. In 1884 the land was not developed, but the 1903 Ordnance Survey map indicates a small market place framed by an ‘L’ shaped building. An historic photograph shows a single-storey building beneath a flat roof. In 1911 a post office was erected at the corner of Ashby Road and the ‘market square’; the ‘L’ shaped building was demolished. An historic photograph shows an open space containing a simple cast iron urinal (pictured below). 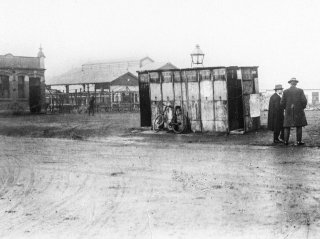 In September 1894, plans had been submitted for a new building on High Street comprising a branch bank at ground floor and “Local Board offices” at the first and second floor. This building remained the offices of the Urban District Council until new Municipal Offices were opened in December 1934.

Early memorials
The Allies signed an armistice with Germany on the 11 November 1918. The Treaty of Versailles was signed on 28 June 1919. Memorial tablets were unveiled at Ellistown parish church in December 1919 (pictured below) and at Hugglescote parish church in March 1920. In Coalville a memorial tablet was “built into the wall of the station yard on High Street”, on the site of the present miners’ memorial statue. Baker (1998) suggests that the memorial was built before c.1919. 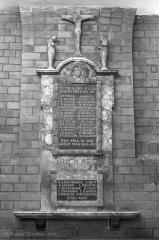 The war memorial committee
The first meeting of the Coalville War Memorial Committee was held on 12 July 1920. The second meeting was held on 26 July. The committee succeeded the Welcome Home Committee and inherited £375 from that committee. At the first meeting John Farmer (pictured below) was elected chairman and Leonard Baldwin was elected secretary. By July 1924 Thomas McCarthy had succeeded Leonard Baldwin as secretary. 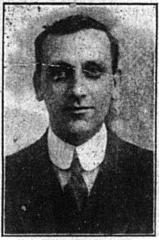 The form of the memorial
At the first and second meetings “discussion of an informal character took place as to the form the memorial should take”. Some committee members favoured a “utility scheme” while others favoured a monument. Messrs Cook, Leach and Taylor were “in favour of something that would be useful to the district”; suggestions included baths, a clock or a recreation ground. Messrs Blower, Smith and Tapp favoured a monument. Mr Baldwin “said he should strenuously oppose the deaths of these men being used to get something that the council should provide”.

At the second meeting Mr Curtis said that “they did not want a ‘dead thing’” and asked “why not build a cottage hospital and the cenotaph in the grounds?” Mr Farmer said that “the hospital committee was still in existence and they should not trespass on its work”. Mr Farmer proposed that “the committee proceeds to erect a memorial”. Mr Smith seconded, “suggesting that they leave the cottage hospital alone”. The proposal “was carried by a large majority”. George Smith proposed “that a subcommittee be appointed to go into the matter of designs for a memorial, cost etc.” Eight members were elected to the subcommittee, including Mr Bennett, Mr Curtis, Benjamin Drewett and George Smith.

The Coalville Cottage Hospital Committee met on the 29 July. Mr Farmer was the chairman of the hospital committee. Mr Tapp proposed “that the scheme be allowed to lapse”. The resolution was carried unanimously.

The design
We have no record of the committee’s activities between July 1920 and March 1923. The committee was not idle. By March 1923 it had raised £1592 including a £100 donation from the local VAD War Hospital Committee. It had “decided that the memorial was to take the form of a clock tower” and it had arranged an architectural competition. During this period a memorial cross was erected at Whitwick parish church (pictured below); it was unveiled in November 1921. On 26 March 1923 the committee met to consider the results of the architectural competition. Three local architects had been invited to submit designs and “drawings of the proposed memorial were on view round the Council Chamber”. The subcommittee recommended “the acceptance of the number one design, which was the one prepared by Messrs McCarthy Collings & Co”. Walter Lindley proposed that the design should be accepted and Mr Bennett seconded. The proposal “was carried unanimously”.

This decision was followed by a hiatus of almost exactly a year. The committee met again on the 30 March 1924. “It was reported that the Charity Commissioners had given their consent to the proposed erection of a memorial clock tower on the land purchased by the council from the Wyggeston Hospital Trustees. The committee decided to proceed at once with the scheme and to invite tenders to be laid before a meeting as early as possible”.

On 15 April 1924 McCarthy Collings & Co submitted an application for a “proposed house on Forest Road for Mr J Farmer”. The house was erected by Walter Moss & Son. There is no indication of impropriety. The architects’ design for the memorial had been accepted more than a year previously, while Walter Moss & Son won the contract for the memorial in a competitive tender.

The tenders
The committee met again on the 14 July 1924. Four tenders had been received. Walter Moss & Son submitted the lowest tender, for £2225. Mr McCarthy said that “if concrete stone dressings were used instead of Derbyshire stone [then] the price would be £2007”. On this basis Mr Farmer proposed “the acceptance of this tender” and Mr Drewett seconded.

The lowest tender was substantially higher than the budget price. In March 1923 it had been reported that “the amount stated when the designs were asked for was not to exceed £1500”. By July 1924 the committee had raised £1714 “but to meet the whole cost it would be necessary to raise a further £400”. In March 1925 it was “necessary to raise not less than £300”.